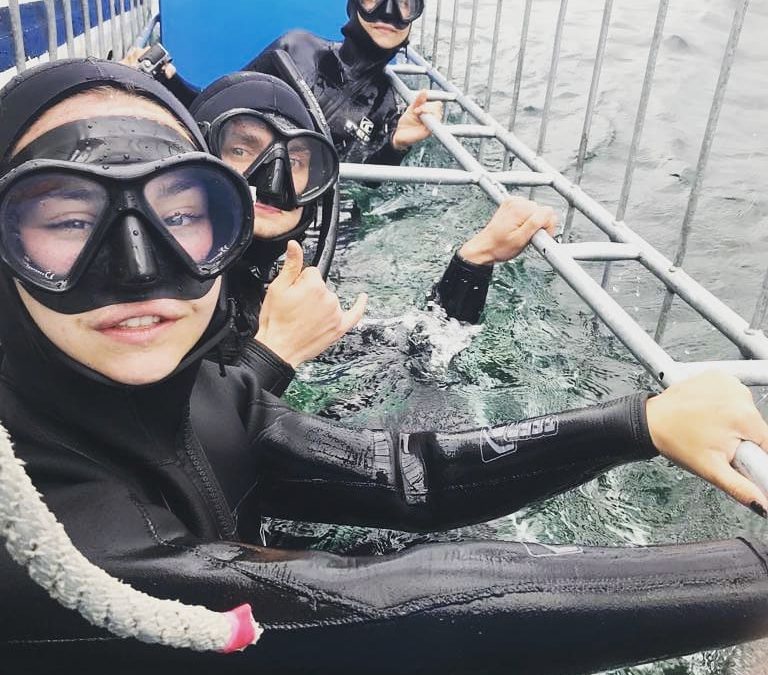 To carry out the observation activities in the wild of white sharks, it is necessary to rely on local tour operators (Shark Diving Unlimited and Marine Dynamics, they are two of the eight operators authorized by the South African Marine Coastal Management) who supply the boats necessary to bring the animals closer. Operators, like others in South Africa, carry out an ecotourism activity, attracting customers thanks to the possibility of observing sharks and other marine animals in natural conditions. Ecotourism also facilitates scientific activities on animals that are otherwise difficult to observe, in this specific case allowing to increase the knowledge on the population, behavior and ecology of various species of sharks, which are the object of study by different international teams of research in areas where ecotourism practices are widespread (Domeier and Nasby-Lucas. 2007; Graham and Roberts. 2007; Malkjovìc and Cotè. 2011).

Ecotourism is becoming increasingly popular in recent decades, resulting in one of the fastest growing tourism sectors within the entire tourism industry (Scheyvens. 1999; Wearing and Neil. 2009). The ecotourism operations aimed at the observation of large predators try to bring the investigated species closer, using food or baits to attract animals and show them to tourists (Orams. 2002). This form of attraction of predators is the only way to show tourists predators, which would otherwise be difficult to approach and in nature they usually ignore or flee in the presence of people (Orams et al. 1996; Burgess. 1998). In the case of sharks, the activity of baiting for ecotourism purposes reproduces natural phenomena of release of physiological liquids of decomposing organisms, which is able to induce natural scavenging activities. Ecotourism plays an important, albeit indirect, action to protect sharks. Recently it has been estimated that about 15% of shark species are decreasing numerically (Baum et al. 2003; Burgess et al. 2005; Dulvy et al. 2008; Ferretti et al. 2008; Worm et al. 2006), especially because of the economic interests deriving from the sport fishing and the “finning”, a deleterious form of indiscriminate fishing of the elasmobranchs to cut the fins that will be commercialized, to then reject the specimens still alive in the sea. Ecotourism is an important activity that contrasts with these practices, managing to sensitize the local populations to the preservation of animal species, presenting them as a resource as well as natural and economic (Catlin et al. 2010; Malkjovic and Cotè. 2011) . It has been estimated that the market value of a single reef shark amounts to about $ 13,000 once captured and killed, while for the same specimen it can be estimated a value up to $ 200,000 in ecotourism throughout the lifetime of the same specimen (Wells. 2010). Similarly, a similar report is obtained by comparing the daily commercial gain of a set of shark fins (about $ 50) with about $ 73 derived from ecotourism activities (Clarke et al. 2007).

The study on the effects that ecotourism activities could determine on the ecology and behavior of the observed animals was also deepened. In particular, those determined by the activity of baiting for ecotouristic purposes on white sharks have been investigated, evaluating the importance of pasture, commonly used by tour operators at Seal Island in False Bay, in South Africa. It was thus possible to highlight how the bait is responsible only for a temporary effect on the behavior of the sharks, during the first hour of observation, on the specimens investigated. This effect, however, decreases already during the second hour of observation (Laroche et al. 2007). Also in the same study, the predator-predator relationship was also considered, but the influence of the bait was irrelevant both on the predatory strategy of the sharks and on the anti-predatory strategy of the Cape seals. Although the Great White Sharks are attracted to the surface by the pasture, they ignore the stimulus when they visualize the prey on which they will attack, so the pasture acts only as an element of initial attraction. Finally, it was noted that the physical presence of boats with observers does not affect the behavior of sharks in the vicinity of pinniped colonies (Laroche et al. 2007).