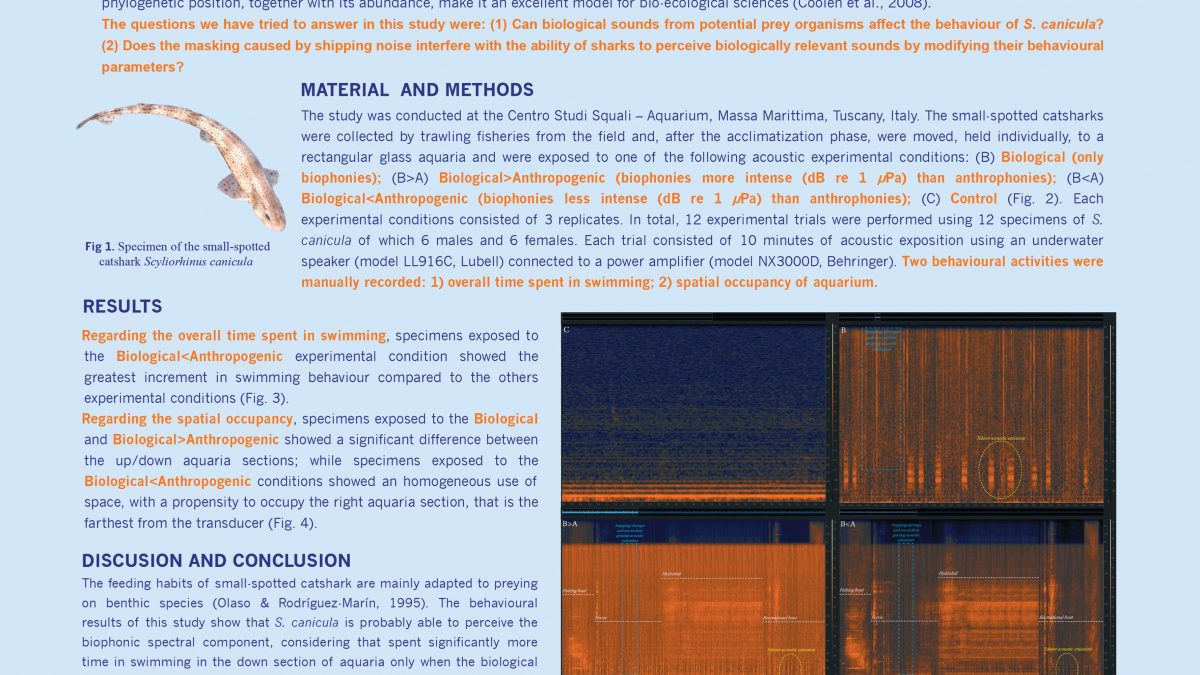 Despite in recent years the interest about the human-made noise effects on marine animals have received notably increasing, at date few studies have investigated the potential role of acoustic masking on animal’s bio-ecological relationship. In this study, we exposed twelve specimens of small-spotted catshark (Scyliorhinus canicula, Linnaeus 1758) to biological and anthropogenic sounds in order to assess their behavioural changes potentially referable to pray presence and masking effect due to the shipping noise. Specifically, the sharks held individually in aquarium were exposed to three acoustic experimental conditions differentiated in their spectral (Hz) components (biological and anthropogenic mixed sources) and intensity (dB re 1 μPa) levels. Swimming behaviour and spatial distribution of the specimens were recorded. The results highlighted significant differences in time spent in swimming and in spatial use of the aquarium among the experimental conditions. The sharks concentrated their swimming behaviour in the aquarium’s lower sections when the intensity levels of the biological acoustic sources were higher than the anthropogenic ones. Conversely, when the intensity levels of the anthropogenic sources were higher than the biological, the specimens showed the highest values of time spent in swimming, and changed their spatial distribution highlighting an aquarium occupancy in favour of the less noisy sections. In conclusion, in this study was hypothesised that the environmental soundscape could play an important role in the small-spotted catshark prey-predator relationship and that the impact of masking effect can strictly depends on the acoustic intensity levels.