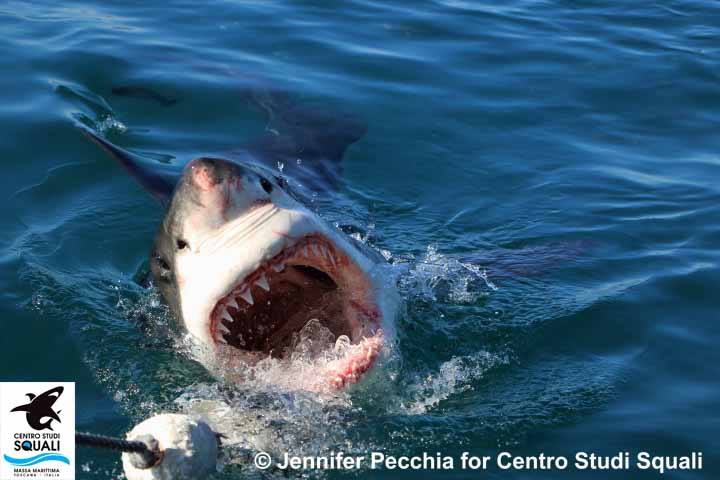 White sharks are cartilaginous fishes belonging to the Phylum Chordata, the Subphylum Vertebrata, the Chondroichthyes class, the subclass Elasmobranchii and the superorder Selachimorpha. The Lamniform order also includes the Lamnidae family, which in turn includes the white shark, (Compagno, 1984). In 1758 Carlo Linneo, a Swedish zoologist, named the white shark with the name of Squalus carcharias. It was Andrew Smith in a work dated 1838 by Johannes Müller and Friedrich Henl that gave the name of Carcharodon carcharias. This name comes from the Greek “càrkharos” which means serrated and “odón” which means tooth.

It is a cosmopolitan predator that lives in almost all the seas of the world, in temperate-cold temperate waters between 8 and 25 ° C (Martin, 2003 Compagno et al., 2005). It is present with relatively abundant populations in only 8 areas of the globe: (. Ainley et al, 1985) California and Baja California, Mexico (Domeier & Nasby-Lucas 2007), central Chile, New England, Mediterranean Sea, western South Africa (Micarelli et al. 2011 and 2016, Ferreira & Foundry 1996), South Australia (Bruce 1992), New Zealand and Japan (Martin 2003). The research dedicated to the biology and ecology of the great white shark has increased particularly in recent decades, also given the scarcity of reliable information on this topic and the numerical decline of the species (IUCN Red List Assessment as ‘vulnerable’, Hilton-Taylor 2000) )

For a long time it was thought that the great white shark was a species with predominantly coastal habits (Compagno 1985 Klimley 1985). In the last twenty years this image has been modified in function of a new, more complex, idea of ​​migratory predator that is able to perform ocean crossing in a pelagic habitat (Boustany et al., 2002, Bonfil et al., 2005, Bonfil et al., 2010, Weng et al., 2007a). Growing knowledge of social and predatory behavior has shown unexpected intraspecific interaction skills and models (Martin 2005, Micarelli et al., 2006e 2008, Sperone et al., 2010 and 2012).

Some physiological characteristics of this “superpredator”, such as the presence of the regional endothermia of the circulatory system that allows it to maintain the temperature of some organs (in particular the brain) 8-14 ° C, higher than that of the surrounding environment Carey 1982), represents an evolutionary advantage that undoubtedly underlies the diversified predatory and social behaviors observed.

The white shark is considered an apex predator, or at the top of the food chain. It has no predators, except occasionally the Orca (Orcinus orca) that compensates for the predatory efficiency of a shark with the typical intelligence of a mammal and cooperation in hunting. Among the dangers, linked to its survival in the presence of the super predator Homo sapiens, there is above all the slow growth rate of its population. This is due to the fact that sexual maturity is late and the number of children is not high. The evolutionary advantage of having a few small but already formed in old age that led him to excel in his habitat becomes a handicap in the presence of the man who fishes him even at a young age, however protected. It has been estimated that a female white shark in her life can at most give birth five times, with a total number of 45 young individuals. These newborns may however be subject to predation of orcas or other sharks, or victims of fishing. Gestation time is unknown but should be about a year (Compagno, 2001). The size at birth is around 109-165 cm TL, reaching a maximum length of about 7m. The great white shark is ovoviviparous and practices uterine cannibalism in the form of oophagy (the term cannibalism is perhaps not the most appropriate because it is actually non-fertilized eggs, oophagy, therefore useful for protein intake).

The diet of the white shark is very varied and includes: plants (Zostera sp.), Molluscs (bivalves, gastropods and squids), crustaceans (crabs), echinoderms (sea stars), teleosts and condroitti, marine reptiles (turtles), birds marine (penguins of the Cape, cormorants of the Cape), pinnipeds (seals, sea elephants, sea lions and sea lions), cetaceans (porpoises, dolphin, dolphins, bottlenose dolphins, whales and whale carcasses). Once a white shark is able to feed with abundant prey, it can wait up to two or at most three months before it has to feed again. Even if the white shark is an active predator, if the opportunity arises it can do scavenging on animal carcasses, especially whales. This is so that it can have maximum calories with minimum effort. However, during the period of sexual immaturity, which in the male is maintained up to 350cm, while for the female at 450cm, the white shark is predominantly ichthyophage, or that is it prefers bony fish and sharks, while after sexual maturity the interest for marine mammals and in particular the pinnipeds prevails, able to provide a considerable energy contribution for the development of the gonads and for the transoceanic transfers. According to current knowledge, the maximum longevity of the great white shark is about 86 years.

In order to provide a contribution to the knowledge on the basic biology and ecology of this species, the Study and Research Unit on white sharks, activated between 2000 and 2003, has been located since 2009 at the Squali Study Center of the Marine World Aquarium of Massa Marittima, coordinated by the Universities of Calabria and Siena and by the non-profit association Posidonia. Since 2003, members of the Unit have been carrying out study missions in South Africa, at Gansbaai, 200 km east of Cape Town, to collect data on the predatory and social behavior of this animal in the waters off Dyer Island and Geyser Rock, where hundreds of sharks can be found at various times of the year. As for conservation and protection, the white shark is included in the IUCN red list as “Vulnerable”. It is also present in the list of species of the “Convention for the Conservation of Migratory Species” and as far as its international trade is concerned it is regulated because it is in Appendix III of CITES.